Having a cat aboard has actually been a common practice through out history.  There are countless beliefs, superstitions, and weather related behaviors involving ship’s cats. 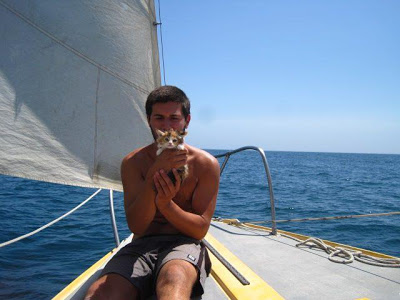 Get their sea legs while they are young.

Beliefs included, if a cat licked its fur against the grain, it meant a hailstorm was coming; if it sneezed it meant rain; and if it was frisky it meant wind.

Some of these beliefs are rooted in reality. Cats are able to detect slight changes in the weather, as a result of their very sensitive inner ears, which also allow them to land upright when falling. Low atmospheric pressure, a common precursor of stormy weather, often makes cats nervous and restless.  Cats have a high ability to adapt to new surroundings, and were therefore highly suitable for service on a ship. They also offered companionship and a sense of home and security to sailors who could be away from home for long periods.  Considered to be intelligent and lucky animals, a high level of care was directed toward keeping them happy[.]

“But the old man always thought of her as feminine and as something that gave or withheld great favours, and if she did wild or wicked things it was because she could not help them. The moon affects her as it does a woman, he thought.” 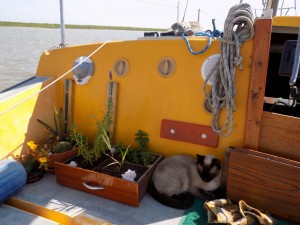