Well Lake Charles was a great stop, all the while there was “The Contraband Festival” going on.  We did not attend, but enjoyed the live music.  As we were shaking up Margarita’s and preparing our lunch, a small event boat came over to us.  They shouted over, telling us there was a high speed boat race coming through in about 10 minutes!  We looked at them extremely confused, as these event boats and police boats were circling us for the past few days, no previous warning.  Also, we were anchored in a no wake zone? With our anchor set hard in the mud from the past few days worth of gusty winds, we scrambled to get out of the way.  Load motors roaring, fans lining up on shore, we were obviously stuck in a bad situation.  The anchor was refusing to come up, so Claire motored up on it hard, while I kept yanking.  Finally the anchor gave way, I got it up on board and it was wrapped in boat carpet… Must have been stuck on some debris.

We quickly got out of that hectic situation and tied off to an abandoned fuel dock outside the Lake on the Calcaseau River.  A salty dawg came over from his big sailboat in the near by marina.  We chatted about his travels.  Eight years of cruising the Caribbean, South, and Central America.  Coming home Lake Charles to be closer to his family, he has been itching to get back out there, but a lightning strike to his mast has left him with a massive overhaul list! Poor fellow.

I hoisted Claire up the mast to finalize our new anchor light.  That night we relocated a few more miles down the River, back towards the Intracoastal waterway, spending the night on anchor in an oxbo.  Basically a small curvature off the River, where bigger boats don’t venture, protected by a spit of land from the gusty conditions that evening. 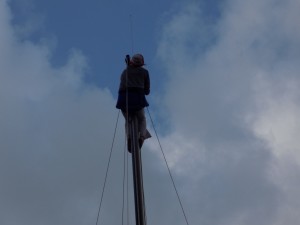 Claire up the mast 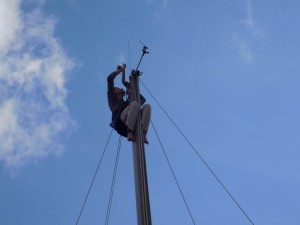 When in doubt, use a lot of duct tape!

7:00 AM we left the oxbo with calmer winds.  Headed towards our first lock and two pontoon bridges.  Never going through a lock before, we were quite nervous.  This one, however, did not have much of a tidal difference.  We simply entered the gate, which closed behind us.  Then sat for a minute while the gate about 1000′ infront of us opened up to a new waterway.  This helps seperate bodies of water with different currents, tidal flows, or depths. 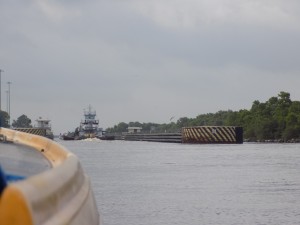 tug boat entering the lock system, while we wait our turn 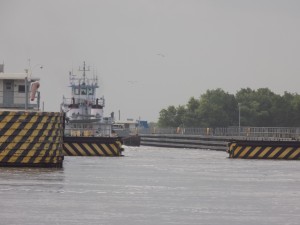 gates closing behind the tug

Later that afternoon the wind and rain really kicked up.  Visibility became not much more than a couple hundred feet off the bow, with gusts over 30 knots.  Weather like this is quite horrible out on an open body of water, but on the intracoastal you feel somewhat more protected.  So we thought, until you realize the tugs with big barges are struggling to keep control.  I stayed on the VHF radio giving our locations, upcoming turns, and intersections to the tug traffic. 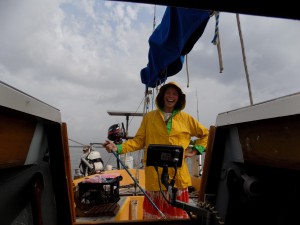 Claire on the helm just before the front

After about 28 miles of foul weather we had had enough!  Along the intracoastal you are literally in the ditch, with grassy banks along the sides. Some cruisers simply pull over and tie to a tree.  To us, this seems like sleeping on the side of an interstate highway, not very smart.  So we search for safe areas off the main path.  Pulling into Bell City Drainage Canal, we dropped anchor and about 30′ of chain in about 10′ of water. Not much swing room, but just enough to keep our little home safe. That night a huge front sat ontop of us, we slept snug through heavy rain with winds reaching 60 knots.

The next morning we left early, with a lot of debris in the water and all the wildlife back out and about.  A nice calm day for us, we traveled eastbound on the GIWW to the Mermenteau River.  Which was a truly serene anchorage just a mile or so off our path.  We made a simple dinner, cleaned up our home, and slept amongst the cypress trees and hoot owls. 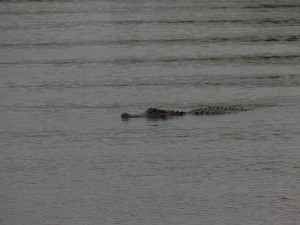 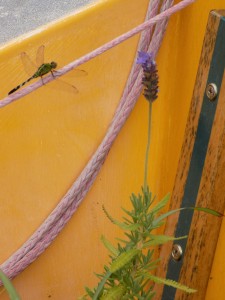