Pulled out of Houma City Docks at 10:00, back at it towards Lake Salvador.  Located about 15 miles west of the Mississippi River and the Harvey Locks.

A hot dead calm day on the water, mostly motoring but we managed to get about an hour of downwind sailing.  Leaving behind the industrial areas, we’re coming into the towns that outskirt the widespread city of New Orleans and surrounding towns along the Mississippi River.  Anchor down in Lake Salvador 17:45. 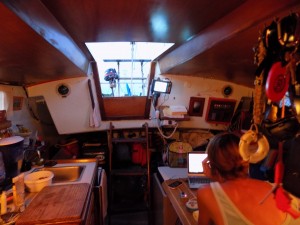 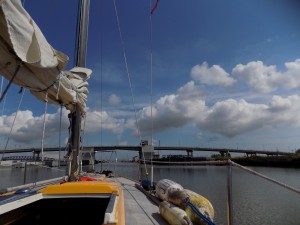 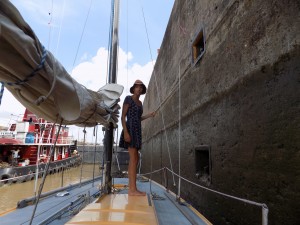 Lake Salvador was a little exposed to the wind for the evening.  We slept great despite the little waves lapping our hull all night.  Woke up sitting in the mud at low tide, but managed to turn right on out of there.  Back at it, 15 miles to Harvey Locks.

Because the Mississippi River flows south at about 3-5 knots, especially with all the rainfall lately, a lock system is used to raise vessels up to meet The Big Muddy.  We got ahold of the bridges and lock master on the VHF radio, to let them know we were a few miles out and wanting to come through.  Luckily, we did not have much of a wait.  The lock opened and we were instructed to come on in behind a tug boat.  Claire took position as our line-man, tying a single line around the base of our mast, looping it to the wall, and holding on as we rise up 9 feet! 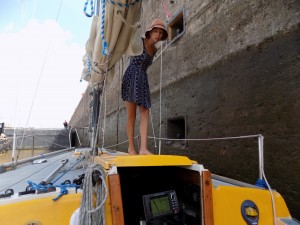 See the waterline on the wall of Harvey Lock 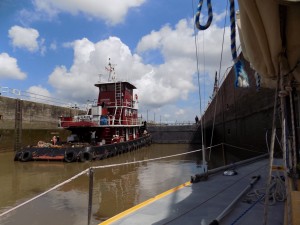 Harvey Lock at the bottom of photo, 5 miles East (south) down the Mississippi River, into the Industrial Lock (waterway in gray area between Upper and Lower Ninth Ward) 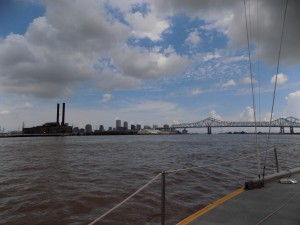 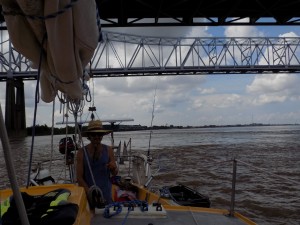 flowing about 3-4 knots, we had the outboard on quite low holding fast at 6-8 knots! You could really feel the current. 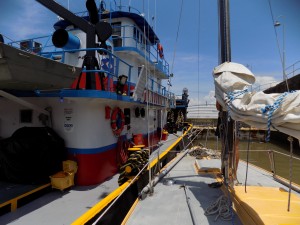 our port-side bow took a bump off this tire coverd tug, coming in hot to the Industrial Lock

Poor communication on the VHF radio towards the Industrial Lock.  With all the foul weather lately, the tug traffic was backed up now that we had a pretty day.  A lot of boats were “stepping on” each other by trying to radio all at once.  The lock-master was having a hard time keeping up with all the calls.  We got ahold of the bridge lift operator on a different channel and she cleared us for entry.  The bridge is a downtown street in New Orleans, with the lock entrance gate not more than a few yards more past. So you have to get double clearance to come on through.

After a few confusing blips on the radio with the Lock master, we were tired of doing circles out front of the bridge.  Not a great place to be sitting if a 1500ft long barge tries to round it’s way in.

Super confused by this, we are stunned, yet pleased that we don’t have to wait to go through.  Just as we’re clearing the bridge, the operator begins closing it for traffic to continue on.  The gates of the lock close immediately behind us, as we slip in just in time.  This lock having a bigger barge in it than Harvey Lock, we had about 60ft. of room left.  Which made stopping distance quite short, no time for reverse on the outboard, i hit nuetral and we coasted in at about 3 knots.  A quick bump off the stern tires of the tug, and we were tied off by one of their crew members.  Coming down 9′ we exited the Industrial Lock.  Successfully crossing the Mississippi River! 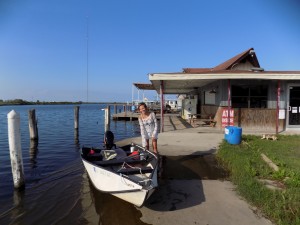 Claire and I took the dinghy up Bayou Bienvenue to find ice, lunch, and gasoline. 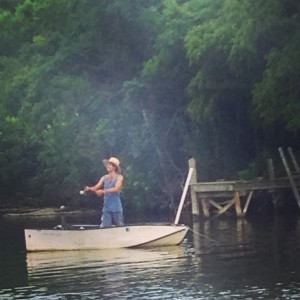 A short while after crossing the Mississippi River, and sailing through a few towns and industrial areas.  We pulled into Bayou Bienvenue, a secluded area with calm waterways. 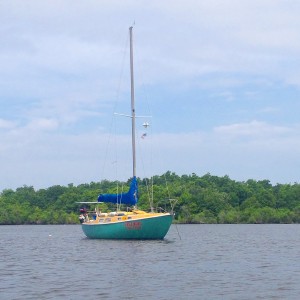 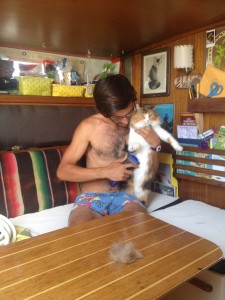 Piña getting a de-shedding 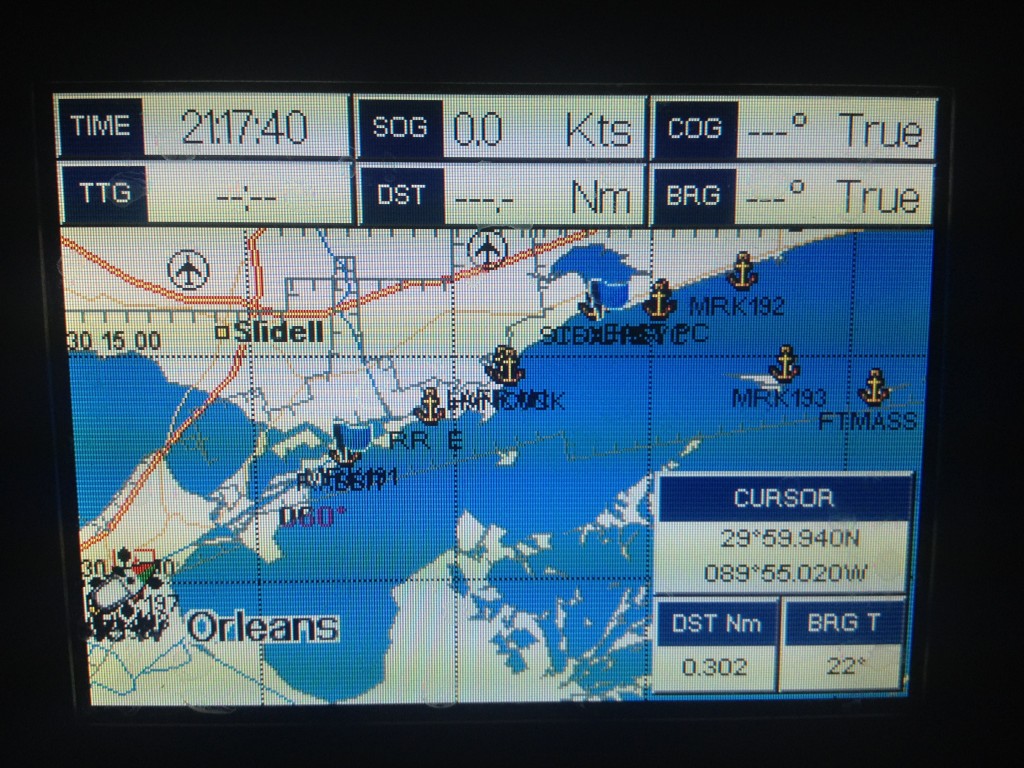 On anchor to the left of screen. Projected anchorages East of the Mississippi River.